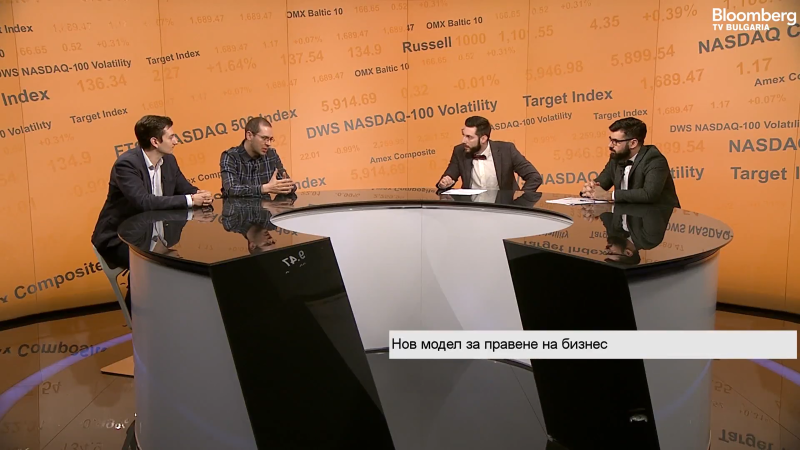 Two of the co-founders of the Comrade Cooperative, Todor Kolev and Ivan Vasilev, were invited to Bloomberg Bulgaria to talk about the main projects the cooperative is developing – an e-governance system for managing organisations on top of the blockchain and AI training network for smart trading agents. The video is with English subtitles, and there is also a transcript of the interview below.

Tell us what is this new model you are developing? Later we will explain what is blockchain and why is it so important?

The Comrade Cooperative is an autonomous digital organisation. We found out that this is the best legal form which uses the latest trends, according to which people create decentralised autonomous organizations. We established the cooperative in December last year in Bulgaria, and the idea is to work together united by a common goal and to develop start-ups which would later grow into successful businesses. Currently, we are developing a system for e-governance which will be entirely based on blockchain, which will allow us this kind of collaboration.

Meaning not only companies but every type of organisation?

We have been thinking about the system for managing both a company and a cooperative in this way. The system would also allow managing the budget of a municipality.

Tell us a bit more about the way you are going to do this. People are wondering what blockchain is, how it is going to manage a budget, and how the organisations will be connected. Some people would think this is a system for draining money…

I can easily explain this. Blockchain allows you to run programs autonomously. This means that no person is controlling them; these programs exist. According to this logic, you can create a smart wallet. A wallet in which we can put money, and it can be withdrawn only according to pre-established rules. If we continue this idea further, this wallet can be transformed into a game. A game is similar to Monopoly or another board game like Catan. The idea is as follows: we put money into the game, we play the game according to the rules, we collaborate, and the result is that the game rewards us. This is the idea, more or less.

This idea is exciting when we are talking about a public resource.

When we are talking about a municipality there could be the following case: there is a specific budget that the city wants to allocate for the municipality’s wellbeing, but it is not clear how exactly to allocate the money. This is where we can create a system with tokens…

Even though there is a budget, and it is clear how to allocate the funds. Many times changes happen on the go.

We are talking about an experimental model, and it is not clear if it is going to work.

Tell us about the model and how it is going to work for a municipality.

I will give just a bit more context. Our system is solving three problems. The first problem is called peer-to-peer rewards. These are rewards for the people who participate in a particular system. It solves the problem of allocating the budget in a specific network and the problem of allocating the profit in a certain order. When we are talking about a municipality, we are solving the second problem. The idea is the following: every participant in the system receives a certain amount of tokens at the beginning of the month. They receive the tokens may be in the form of a universal basic income. Not an income that he can use for himself. He can allocate to budgets and to people he is collaborating with

This means that with these tokens, he can vote on how to allocate the money.

This is a genius. This is a form of direct democracy without the expensive referendums for each issue. How did you come up with this idea? When did you start working together, and what is your background?–Before I started working on the idea that came from Todor, I have been working in the president’s administration. I have been developing analyses in different areas, including technology. There I realised that the public sector needs to solve similar problems. The problems that the technology of today can solve. Todor’s idea to create an autonomous system based on blockchain where decisions will be taken democratically inspired me to participate in the project and continue its development. How he came up with the idea.

Ten years ago, in 2008, during the big recession, I founded another company called Obecto. Back then, I realised that there is something broken in the world. At this time, I was working at another company in which I felt like a replaceable cog in a more massive machine. I wanted to establish a company in which people will be more important than profits, where we will be working together. Ten years ago, I founded Obecto, and since the beginning, I started experimenting with different models. The company has always been open; everybody knew how much money the company makes, what the remuneration rates are. We experimented with several bonus systems. The natural evolution of these bonus systems combined with the significant attention towards Ethereum in 2014 made me think that this is the way to solve all problems and create this autonomous game. Several years afterwards, we found the Comrade Cooperative.

If, for example, Kuzman and I have a company, what would be how you will integrate us into the system, how would you support the way it will function?

Ok. Well, I think about people as intelligent agents who are optimising a specific function. And the current remuneration models that exist in a company do not direct them to optimise for the right things. For me, a salary is a form of socialism. You go to work and know that your salary is secure. No one expects anything from you but to go to work and cover some minimal criteria. Our system connects the business’ goals with people’s intentions. There is a real added value, and people are motivated to do more.

You are also developing an artificial intelligence system. Tell us more about it.

There is an accumulation of processing power with the crypto hype, and you want to use it.

Yes. Most probably, this year there will be a switch to a new algorithm in the Ethereum cryptocurrency which will make mining unnecessary.

You are working with these coins that are being allocated and help for the budgeting in a company or municipality through Ethereum?

Currently, we are using a prototype for this network. In the future, we are planning to use different, more modern systems. But for now, we use this one.

Unfortunately, we don’t have enough time. These topics are very interesting, and you talk about things that sound like from the future. However, they are arriving fast. What are your plans from now on?

For this year, we are planning to develop the system for e-governance and the method for self-education of artificial intelligence. For next year we are planning to establish a system that will help people find developer or specialists for their project – a marketplace. Its codename is STAMAT – software team automat. The other project that we are planning to start is in education, and its working name is Norma. It aims to develop people’s skills according to their interests and take them along the path from being curious to being competent in a specific area.

Last week our guest was the Deputy Minister of Economy Mr Borisov, and he shared that there will be a significant resource supporting start-ups. How do you develop your own business from the financial point of view, how do you finance and organise these forward-looking projects? It is fascinating for young people. And additionally, how many people do you have on the team?

Sixteen people initially founded the Comrade Cooperative. However, people who are gravitating around it are about 25. Many people are showing interest towards us, calling us, wanting to be included and to help in some way. This is an exciting idea that attracts different people, including investors. We are close to signing a deal with an investor. Although it is a cooperative, this is a profitable business for the investors.

I want to add something regarding the investment. We have an innovative approach there as well. The investment is in the form of debt. Unlike the traditional equity investment but taking a loan that is paid back in several years.

So you go to the investor and tell him to give you a loan in the form of a share, and we will pay it back. Is it possible to convert it into capital?

The idea is that the cooperative does not have money. The return of the loan is 8x (times). It is being executed through those tokens, which is a bit longer to explain, but the return is 8x (times). Since there is interest from investors, the system is transparent.

We wish you success, and you are welcome back in, let’s say six months so that we can observe how the dynamic evolved. We have often done shows with such young people who become very successful in 3-4 years and have a developed business.